. . . insurance companies thought I was building a rocket in my backyard! 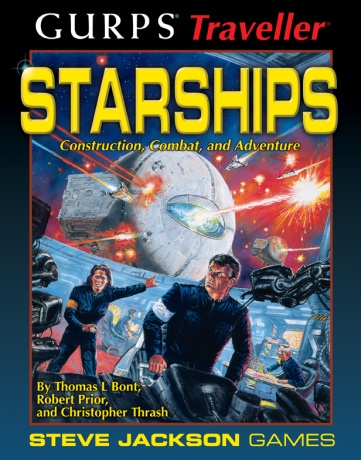 When ships to sail the void between the stars have been invented, there will also be men who come forward to sail those ships.
– Johannes Kepler, Somnium, -2887 (1634 A.D.)

From launches to liners, from system defense boats to dreadnoughts, a starfaring campaign requires ships . . . and GURPS Traveller: Starships gives them to you! In addition to rules for designing and rating your own spaceships (from TL9 through TL13), this book contains over 35 pre-designed craft, ranging from 10-ton fighters to 500,000-ton dreadnoughts, described in detail and ready for use in a campaign.

Deck plans are included for the:

GURPS Traveller: Starships also details the “View from the Deck”; the experience of being aboard a starship. Passengers and pursers, bridge crews and black gang, owners and deckhands; they’re all here.

Whether your campaign involves a single surplus scout ship or a fleet of dozens of warships, GURPS Traveller: Starships has everything you need!

Note to insurance companies: The rules contained in this book are for a game. This book is not an instruction manual on how to build a real spaceship.

As long as I have a piece of charcoal to scratch upon a rock, I'll leave you a story long after I'm gone.
Loading Comments...
%d bloggers like this: